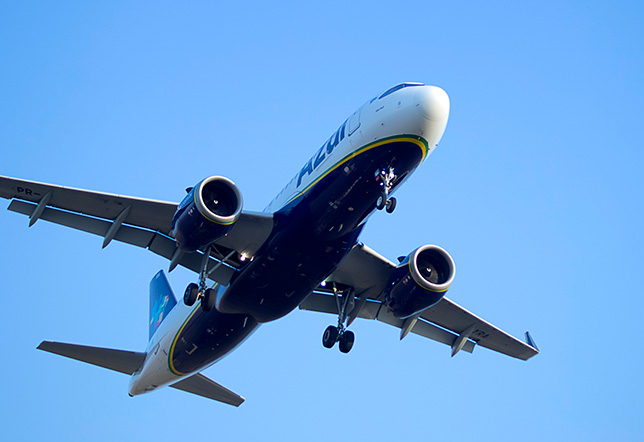 What are the factors behind Azul’s successful recovery?

A look at the Azul story

What are the factors behind Azul’s successful recovery?

By Mike Malik, CMO of Cirium

For Portuguese speakers, the word “azul” means blue. For many Brazilian travelers, Azul also means something else: an airline they like to fly.

Azul Linhas Aéreas Brasileiras, to use its formal name, started in 2008, making it younger than its two closest rivals LATAM and Gol. Today, however, as schedule data from Diio by Cirium shows, Azul operates more flights than any other Brazilian carrier. As it often likes to say, Azul enjoyed one of the fastest recoveries from the pandemic of any airline. Diio indeed shows that its seat capacity this quarter (as of Oct. 18th) is 6% above what it was in Q4, 2019.

Azul is not just talking about capacity. Its traffic and revenues have recovered strongly as well, and operating profits are back. Executives tell investors to expect stronger financial results than ever as more efficient new planes arrive, replacing older models. These new planes will also make Azul a more environmentally friendly airline.

Azul is also considered a customer friendly airline. One indication of this is a commitment to on-time performance, helped by the fact that much of its flying is from less congested airports. Each month, Cirium reports On-Time Performance rankings for airlines worldwide, and for August this year, Azul came in number one for the category of global airlines. (Find out more about Cirium’s On-Time Performance data here). Nearly 90% of Azul’s August flights arrived on-time (defined as an aircraft arrival at the gate less than 15 minutes of the scheduled arrival time). Its flight completion factor topped 99%.

Rather than rely on one of the city’s two main airports, it instead has its largest hub at Viracopos airport in the nearby municipality of Campinas. This has allowed Azul to avoid congestion and struggles over airport slots. It does, to be clear, serve the two main São Paulo airports as well, but Campinas is by far its largest and most important airport.

As Diio shows, the number two airport on Azul’s ranking, measured by scheduled seat capacity this quarter, is Belo Horizonte, Brazil’s third largest metro area by population after São Paulo and Rio de Janeiro. Also important is Recife, a city popular with tourists located on Brazil’s northeastern Atlantic coastline. One of Azul’s busiest routes connects the downtown airports of São Paulo and Rio, where it has managed to increase capacity in recent years by obtaining more airport slots. Other key markets include Porto Alegre, Cuiabá, Belém, and Manaus.

The Cirium Fleets Analyzer database shows that it currently flies everything from widebody A350s and A330s to regional ATRs and even some single-engine aircraft. Forming the core of its fleet, though, are E-Jets and A320-family jets.

Azul even has a few dedicated B737 freighters, supporting its profitable and fast-growing cargo business. In the first half of this year, its cargo revenues jumped nearly 40% from the same period a year earlier. Cargo is one of three business units that Azul says are high-margin and fast-growing. Another, Azul Viagens, sells holiday packages. There’s also TudoAzul, its loyalty program which currently has more than 14m members.

Just prior to the pandemic, Brazil’s airline market consolidated from four major airlines to three, following the collapse of Avianca Brasil. Azul’s profits surged as a result, reinforcing its conclusion that South America’s airline market is too fragmented relative to its size.

Azul boasts of other strengths, including the absence of nonstop competition on most of its routes. It expects to drive more ancillary revenues in the years ahead. It claims to have among the world’s highest net promoter scores for an airline. Growth prospects are encouraging, furthermore, given that air travel per capita in Brazil remains lower than even many of its South American peers.

All of this points to a new meaning for “Azul”: an airline with blue skies ahead.

Learn more about Diio by Cirium

How has New Zealand’s international aviation market evolved since the pandemic?
on the fly: How is the Europe-East Asia airline market performing?
Back to Thought Cloud