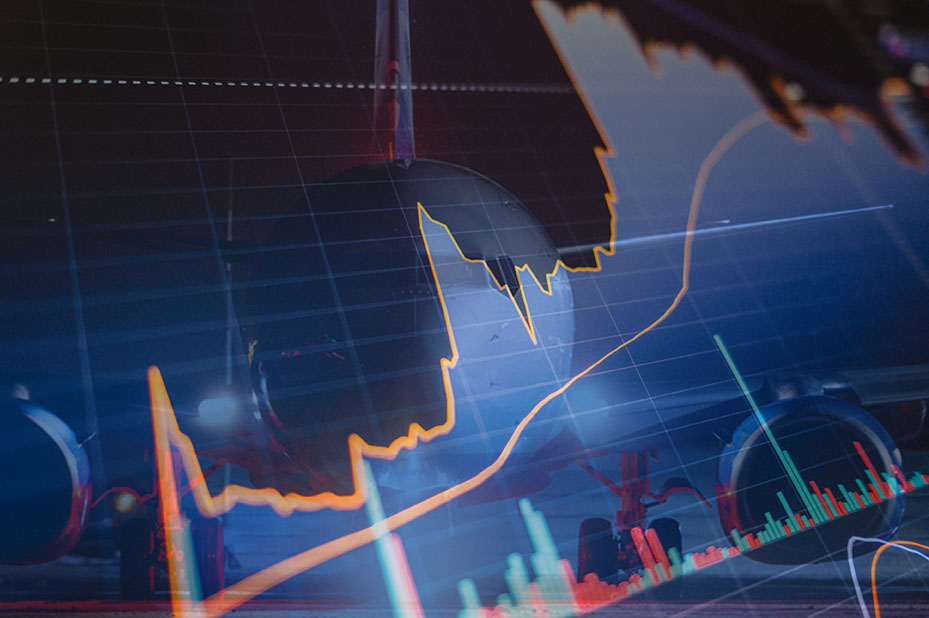 It is an opportune time to examine the relationship between inflation and aircraft values.

By George Dimitroff, Head of valuations, ISTAT appraiser at Ascend by Cirium.

Inflation is raging in many parts of the world; currently at its highest levels since the early 1980s (depending on what you put in the “basket of goods”), and the US dollar – the primary currency in which aircraft are traded – is at the forefront, while many other currencies are even more affected. We find ourselves in an interesting time where near-term conditions are very different from the long-term trend, and therefore it is an opportune time to examine the relationship between inflation and aircraft values.

Since aircraft trade predominantly in US dollars, Ascend by Cirium’s position has been that the inflation rate that affects the US dollar is also the rate that should be applied to aircraft values. We have also said before that if inflated Market Values are not following the Base Value curve of an aircraft over prolonged periods of time (and perhaps deviating further), then the curve needs to be adjusted accordingly, rather than aircraft value forecasts getting preferential treatment with lower or higher inflation rates.

It is worth remembering that we have only experienced the current high-inflation environment for approximately two years, whereas our Base Value forecasts are applicable over the entire life of an aircraft, projected as far out as 30 years from today.

This creates a dilemma for appraisers – how much of the current inflationary price increases will stick permanently and how much will be held back or reversed by other market dynamics later in the decade?

As of September 2022, the US Consumer Price Index (US-CPI) had a trailing 12-month average increase of 8.2%, or if we exclude energy – 6.6%. We prefer to exclude energy when talking about aircraft values because the cost of burning fuel is accounted for separately in our Base Value modelling. Besides US-CPI affecting the dollar in general, in the aerospace sector, OEM escalation formulae are also sensitive to the US-PPI (Producer Price Index) as well as other indices. We recently calculated the theoretical outputs of Airbus and Boeing escalation formulae, and they are averaging somewhere between 9-10% year-on-year if uncapped. Meanwhile aftermarket spare parts pricing in some cases has increased by more than 10% while maintenance labour rates are rising by around 4% at the moment. All these different figures need to be taken into consideration when forecasting Base Values in the coming years.

The difference between Base Value inflation and OEM contract price escalation

A Base Value, as defined by the International Society for Transport Aircraft Trading (ISTAT), is a reflection of the long-term underlying economic value of an aircraft in a balanced market. As such, the inflation rate that a Base Value experiences is not necessarily the same as the escalation to OEM purchase agreements.

When an airline or lessor places an order for new aircraft, it contracts for a starting price when the purchase agreement is signed, and then as each aircraft in the order is delivered, the price payable on delivery is escalated according to pre-defined formulae. In general terms, aircraft from the same order are delivered at higher prices each subsequent year than those delivered the year prior. The final aircraft to be delivered from a given purchase order usually tends to be priced highest.

This is key – because our observation of long-term trends has been that new aircraft pricing has been consistently unable to keep up with inflation over the last 30 years. Nonetheless, the starting price of a new order is still likely to be positioned slightly higher than that in the previous order placed several years prior.

The chart below illustrates this concept for an unspecified single-aisle aircraft, assuming the same customer is placing repeat orders from the same OEM for similar quantities of the same (or similar) aircraft.

Projecting Base Values for future Years of Build

Historical data going back to 1980 suggests that new aircraft pricing has trended downwards in real terms, (after adjusting for historical US-CPI). This phenomenon is reflected in our Base Values, where each new Year of Build starts at a price point slightly below the previous year, in constant dollars.

A study we conducted pre-pandemic analyzing new aircraft pricing trends found that new single-aisle values have been decreasing by 1.7% annually on average between entry into service and end of production, in real terms, while twin-aisle new values have been decreasing by 2.3% per year on the same basis. We will revisit this analysis again before year-end to verify whether the figures 1.7% and 2.3% have changed much or if they still apply, but this concept of declining new pricing in real terms will remain a key aspect of our Base Value forecasts for future Years of Build.

All of our Base Value forecasts made in constant dollars are inflated by our online valuations tool – Cirium’s Values Analyzer, between today and the year of delivery, at a fixed 2% per annum. The inflation rate for the Base Value curve from the year of delivery onward is selected by the end user, but limited to no more than 3%. This has worked without issue in recent years but has started to cause some concern for deliveries occurring in the next few years.

Acknowledging that things are a little different right now

We recognize that market conditions today and in the coming few years are likely to differ significantly from the long-term trend, due to not only the uncharacteristically high US dollar inflation we are experiencing, but also due to constrained supply of new aircraft. Manufacturers are struggling to ramp up their production rates to the levels they were in 2019 because of supply chain issues and other hurdles. The combination of factors is giving the manufacturers an opportunity to increase their new aircraft pricing meaningfully for the first time in decades, and while this is caused by temporary market dynamics, we believe that some of the increases will, to a degree, be permanent – which is why we should consider how it will affect Base Values for the next few years of aircraft deliveries.

We do not believe that it is reasonable to apply OEM escalation rates to our Base Values, as discussed previously. We have observed in the past that when customers have contracts that have been around for too long and escalation has driven their pricing to extremely high levels, they re-negotiate with the OEM and correct pricing downward to more realistic levels in line with market conditions at the time. We have even seen airlines cancel old orders that were victims of many years of escalation, and place new orders at prevailing market pricing. We have also observed OEMs allowing customers to carry-over their pre-delivery payments (deposits) to new orders because they don’t want to lose the customer’s business to the competing manufacturer. This further strengthens our view that escalation to OEM purchase agreements right now should not be the same as escalation to Base Values.

However, we do correct Base Values for actual inflation at the start of each year, by reviewing multiple sources of inflation data for the prior 12 months and applying a real inflation rate to all Base Values (current and future) for the new calendar year. This means that as we get closer to the future delivery date of an aircraft, the Base Value on delivery could end up being higher than what we were originally projecting online based on long-term trends.

Given how the data is trending (year-to-date), it is probable that the inflation rate that will be applied to all our Base Values on 1 January 2023 may be higher than the fixed 2% that is automatically applied by Values Analyzer for future Years of Build. This means that the Base Value of the same aircraft delivering in 2023 or beyond may well appear higher when downloaded online in January 2023 or later, than what appears online if queried today. The Base Values for future Years of Build that we show today are only projections/forecasts, and like all projections they are subject to change.

Some planned adjustments to reflect the near-term reality better

We will continue to correct Base Values every January for the actual inflation rate, as we have been doing, which means our Base Values will always be fit for purpose by the time an aircraft reaches its delivery date. However, we are also considering some other measures to be able to better project Base Values for the next few Years of Build. These include:

These changes will be applicable to commercial aircraft, and although business jets and helicopters will also have their generic Base Values inflated by the same rate as commercial aircraft, the methodology applied to their maintenance costs or future Years of Build may differ depending on dynamics and trends in those segments.

When dealing with Base Values, it is good appraisal practice to avoid knee-jerk reactions to short term trends that could affect forecasts made for 20-30 years into the future. We are very mindful that the current high inflation environment may be a blip on the radar when compared to long-term trends, but it could also have some longer-lasting consequences too. At Ascend by Cirium, we believe in being pragmatic rather than rigidly bound to the established way of doing things, and therefore we will be making some cautious adjustments with the ultimate goal of offering our clients the most realistic estimates of future Base Values that we possibly can, with the knowledge and information that is available to us at this time.

on the fly: How is the Europe-East Asia airline market performing?
AAM Snapshot September 2022 – New Order Tactics and a New Kid on the Playground
Back to Thought Cloud