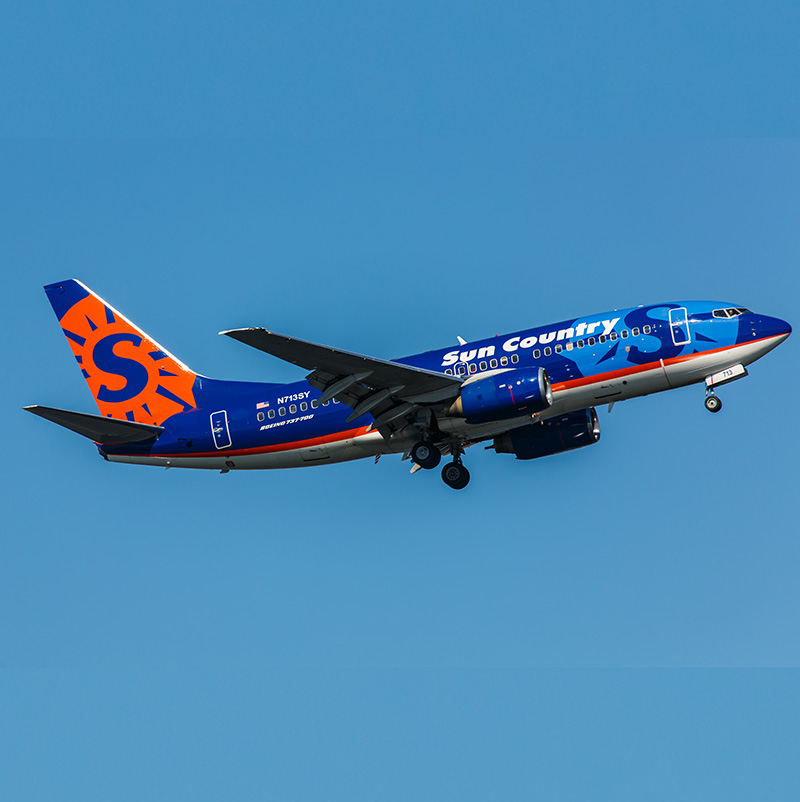 It’s hardly a new airline. Sun Country started flying almost four decades ago. What’s new, however, is the carrier’s status as one of America’s most successful airlines.

Last night I had the pleasure of attending the Airline Strategy Awards dinner at the Honourable Artillery Company in London. Jeremy Bowen, CEO of Cirium, and I were there to celebrate leadership excellence in the airline industry. Jeremy presented the award in the category for Sector Leadership which went to Jude Bricker, CEO of Sun Country Airlines based in Minneapolis-St. Paul, USA. Dave Davis, President of the airline was on hand to accept the award. He was accompanied by Bill Trousdale, vice president of financial planning and analysis and treasurer of the company. It was a fantastic evening and led me to reflect on this airline whom I’ve known about throughout my career. It’s hardly a new airline. Sun Country started flying almost four decades ago. What’s new, however, is the carrier’s status as one of America’s most successful airlines.

Remarkably, Sun Country managed to earn a solid operating profit during 2021, with the pandemic still raging. It stayed profitable in the opening quarter of 2022 too. How is this small low-cost carrier in Minneapolis-St. Paul, never known as a financial standout, suddenly outperforming almost everybody?

The turning point was 2018. A Schedule Monthly Summary Report from Cirium’s Diio airline planning system, shows just how modest its network was at the start of that year: Just 32 scheduled routes from its home airport Minneapolis-St. Paul. It did some charter business as well, but that didn’t prevent Sun Country from having among the lowest profit margins of any US airline at the time. In April 2018, however, the airline was sold to new owners, who installed a new management team led by former Allegiant executive Jude Bricker.

He and his team had some difficult decisions to make. Perhaps most importantly, should Sun Country become an ultra-low-cost carrier? The answer they chose was yes, but with a twist. Sun Country today is in many ways like Allegiant, flying only when there’s strong demand, even if that means lower aircraft utilization. In Diio’s Schedule Daily Summary Report for Sun Country, many routes show flights operating on only peak days during the week. Bargain shopping for B737-800s on the secondary market helps make this strategy successful. In the meantime, Sun Country is very ultra-LCC-like in its aggressive pursuit of ancillary revenues and focus on leisure and VFR traffic. Yet it offers more seat pitch than most ULCCs, plus free beverages, in-seat power and inflight entertainment. That often helps it command a yield premium.

Sun Country likes to call itself an expert in executing a seasonal network.

This means flying Minnesotans to warm-weather places in the winter (Diio shows Orlando, Fort Myers and Phoenix as its busiest wintertime routes). In the summer, it allocates more seats to east-west flying from Minneapolis-St. Paul (to cities like Los Angeles and San Francisco). It also pursues what it calls a “super-scraper” strategy, feasting on small slices of very large leisure markets, like Dallas-Fort Worth to Cancun, only at the height of their demand peaks when other carriers tend to spill traffic.

These are all interesting and successful strategies, for sure. But they still don’t explain what’s so unique about Sun Country. In fact, the company generates less than 70% of its revenues from its scheduled passenger business. Another big question Bricker and his team had to answer early on was whether to keep its charter flying. Their answer was yes, and today that provides another 13% or so of total revenue. Multi-year contracts with large customers like the U.S. military, Caesars Entertainment and Major League Soccer provide a stable base of revenues that remained firm even during the pandemic. Even better, charter customers foot the bill if fuel costs increase, a nice arrangement to have these days.

With earnings support from charter and cargo, Sun Country has more flexibility to adjust its passenger schedules up and down as demand and fuel costs fluctuate. Consider this stat from Diio’s Schedule Monthly Summary Report: In the first quarter of this year, Sun Country’s seat capacity was 11% higher than it was in the same quarter of 2019. During the current third quarter, by contrast, its seat counts are down 11% from the equivalent quarter in 2019. Clearly, the rapid rise in fuel prices is a growth deterrent and frankly, Sun Country is fine with that. No demand, no expansion.

This is not your father’s Sun Country.

Advanced Air Mobility: turning opportunity into reality with data
on the fly: How is Thailand’s airline sector performing?
Back to Thought Cloud