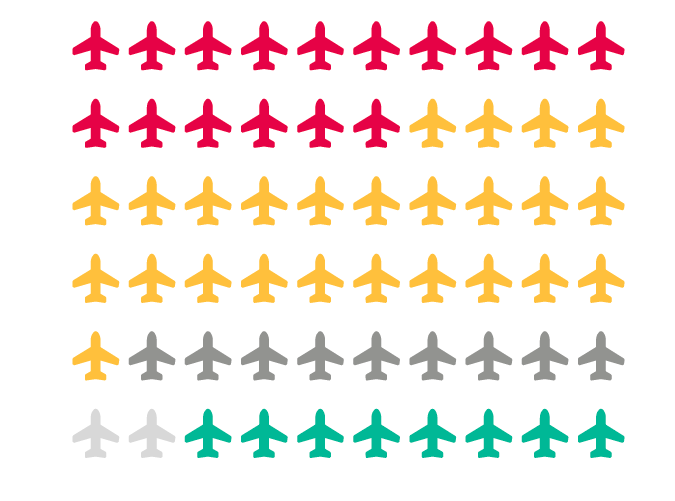 Southeast Asia is now top of the itinerary with Chinese travelers, according to Cirium survey

Cirium’s new survey results reveal that China travelers’ preference in leisure destinations is changing. While East Asian locations, such as Japan and South Korea, were the most popular holiday spots before the COVID-19 outbreak, the new Cirium Traveler Intelligence Survey for China highlights a profound preference for Southeast Asian countries.

Although the China survey shows remarkable consumer confidence in regional and international air travel, the shift in destinations will undoubtedly have a major impact on the travel and hospitality sectors.

East Asian destinations have their work cut out if they want to win-back business from the previously lucrative Chinese travel market.

A detailed look at the survey findings highlights the scale of the shift. Almost one third of respondents (32%) selected Southeast Asia as their region of choice, which is twice the number (16%) who chose East Asia. To put that into perspective, Cirium data reveals that prior to COVID-19 East Asia was a top choice for Chinese travelers.

Despite the much longer distances and significant cultural and language differences, Europe somewhat surprisingly took the second spot, with a quarter of Chinese travelers (25%) opting for an old-world experience as their next holiday.

There are also notable demographic differences. Younger travelers aged between 18 and 29 years old were more likely to choose Europe for their next international flight.

More than one-third of this age-group selected Europe – a higher proportion compared to any other region, and well above the rate for respondents aged 30+ (20%).

Asia Pacific is gearing up for gradual reopening

Around the world, air travel is beginning to pick up, with Asia Pacific bouncing back as the region gradually follows Europe and North America in reopening borders. Countries across the region are already giving travel resumption a bigger push. However, this time things could be a little different. After successive cycles of reopening and shut-downs, governments are now talking about the need to shift towards treating COVID-19 as endemic, rather than focusing on complete elimination. This might offer airlines some confidence in restoring flight capacity in the lead-up to the traditionally busy end-of-the-year period.

In recent months, a number of governments have announced plans for a gradual restart of domestic and international air travel, contingent on measures such as vaccination rates, testing and reduced quarantines. As the new Cirium survey points out, that approach will be welcomed by Chinese travelers who are ready to fly.

Maximizing COVID comfort will be critical

The Cirium Traveler Intelligence Survey highlighted the importance of health and safety measures in increasing the confidence of international travelers from China.

While there was broad confidence in flying again, 35% of those surveyed made it clear that any decision to travel by air post-pandemic would be greatly influenced by health, hygiene and safety concerns. For example, over 85% of respondents expressed support for the introduction of health passports as a prerequisite to flying.

Nearly all of the survey respondents (96%) support the implementation of mandatory face mask requirements when traveling by air. The majority of people interviewed (66%) cited mask mandates as an important factor when choosing an airline, along with the quality of cleaning procedures (65%).

Proof of a negative COVID-19 test prior to departure is a consideration for many respondents (62%) when it comes to selecting a carrier. Apps that promote “touchless” travel have also proven to be increasingly popular, creating an opportunity to build closer and robust relationships with customers.

Predicting future travel trends is particularly difficult in the current environment. Flight schedules can shift overnight due to changes in government mandates and border restrictions, all of which impact demand and fares.

It will certainly be interesting to see how the preferences of Chinese travelers evolve, and what steps airlines and destination countries take to forecast traffic and attract travelers.

Some actions are obvious. The near universal support for mandatory mask wearing and health passports as a pre-requisite to air travel offer an opportunity for carriers and locations to enhance their appeal among Chinese travelers. Along with other safety and hygiene measures, such as improved cleaning at airports and onboard aircraft, greater levels of personal space, and the increased use of touchless technologies, they can play a significant role in accelerating the return of air travel confidence among Chinese travelers.

With the right solutions in place, the Chinese traveler is unquestionably set to return to levels of air travel that will match or exceed pre-pandemic levels. What remains to be seen is whether the new preference for Southeast Asia is a permanent change or a temporary phenomenon.

The survey into present traveler sentiment was carried out by independent market intelligence firm AudienceNet on behalf of Cirium, interviewing over 2,060 adults in mainland China between August 30 and September 8, 2021.