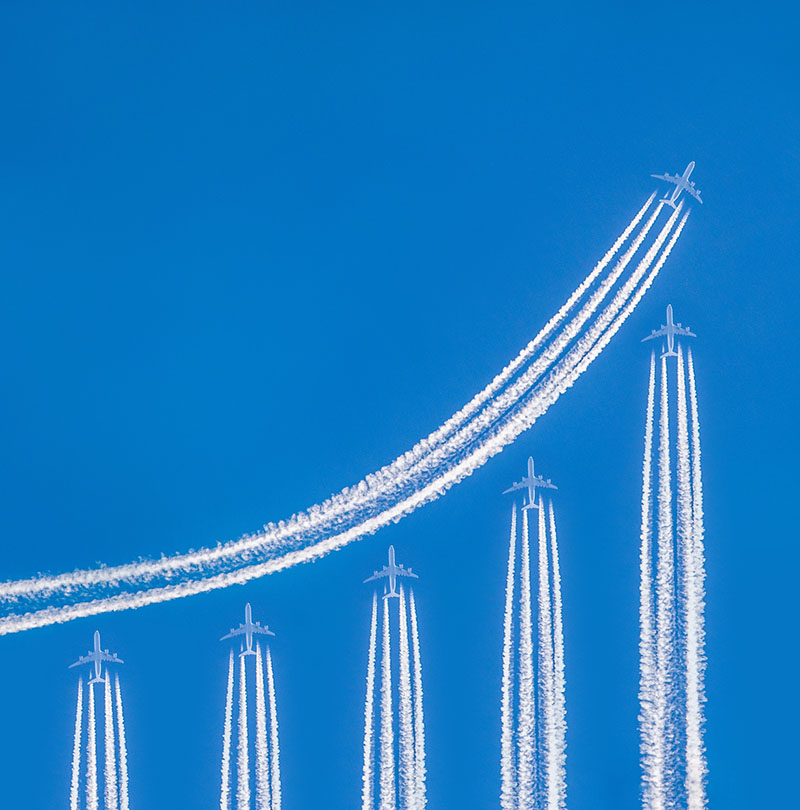 As we reflect on the unusual summer season, data shows demand recovery has continued apace over the last six months, with positive trends emerging across most regions.

“The global in-service fleet is expected to reach 2019 levels even earlier, as aircraft utilization and load factors are significantly lower than before the pandemic,” explained Henk Ombelet, Ascend by Cirium’s Head of Advisory Operations.

According to Ombelet, recovery is now entirely paced by government health and travel policies worldwide – and is difficult to predict with any sense of precision.

At the end of October 2021, scheduled passenger flights were approximately 37% down on 2019 levels globally – with an even more optimistic 31% projected for November.

“However, airline planning has changed a lot over the last 18 months,” said Ombelet.

Airlines are adding more flights to the schedule, but as demand may or may not materialize, they remove or combine flights where necessary. This means schedules are likely to drop nearer to the date.

Most indicators are showing positive recovery trends in most regions. But while Chinese domestic demand has surpassed 2019 levels, the Asia-Pacific region continues to lag behind overall.

Demand for international travel in the APAC region is still suppressed by ongoing travel restrictions and government policies – even more so than in Europe. But vaccination rates are key to increasing confidence and driving positive government policy, according to Ombelet. He argued one of the underlying causes for limited progress in the APAC region is that many countries are yet to reach a 70% vaccination rate.

As we head into the winter season, the steady decrease in global stored passenger aircraft is continuing, with over 750 fewer aircraft tracked in storage than at the end of July.

Although around 80% of narrow-bodies have now returned to service, the utilization of these aircraft is not as high as before the pandemic. Airlines are rotating their aircraft to keep them flying and avoid long-term storage.

Interestingly, however, the number of aircraft retired in 2021 to date is below 2020 levels. According to Henk Ombelet, this is due to a reduced demand for spare parts which makes retirements less attractive for carriers right now.

“Airlines have been reducing maintenance to a minimum during the pandemic to keep operating costs down, which in turn drove down the cost of spare parts. With increasing activity, we are expecting retirement levels to rise again in 2022.”

Since the start of 2020, operating lessors have financed almost two-thirds (65%) of all new OEM deliveries – including a total of 430 acquired brand new, through sale and leaseback.

According to Rob Morris, Global Head of Consultancy at Ascend by Cirium, lessor market share has grown throughout the pandemic because lessors have capital which enables them to finance deliveries more efficiently than airlines can.

The pandemic has driven operating lessors’ share of the global single-aisle and twin-aisle jet market over the 50% barrier – it is now estimated to be 50.3%, which equates to 11,250 aircraft owned or managed by operating lessors today.

Rob Morris, Global Head of Consultancy at Ascend by Cirium

“Over the next three or four years, we expect to see a total of around 5,000 new passenger aircraft deliveries, largely from Airbus and Boeing,” explained Morris. “Lessors will continue to acquire around 20% of the backlog directly, but that leaves significant purchase and leaseback opportunities.”

Used aircraft leasing on the rise

At the height of the pandemic, in April 2020, around 60% of the global passenger jet fleet was parked. In the light of this surplus, how have lessors succeeded in placing aircraft in a secondary market?

Although the secondary lease market took a brief pause in mid-2020, Ascend by Cirium analysis shows the volume of new leases for used aircraft is once again back to pre-pandemic levels.

“In summer 2020, there were very few placements,” said Morris. “But as we moved further forward, lessors became even more adept at placing aircraft into leases. Consequently, in June 2021, we saw the second-highest single-aisle peak on record after June 2019.”

Cirium data also showed the available inventory for lessors has more than doubled in April 2021, but appears to have stabilized since. According to Morris, a significant number of aircraft are scheduled to come off lease in the coming years, and these scheduled lease returns will drive significant further availability, particularly in the narrow-body market.

“By the end of 2022, we expect to see around 600 Airbus A320 Family aircraft available for lease in a secondary market.”

As expected, market values and lease rates were significantly affected by the decline in demand. Ascend by Cirium examined the drop in values on a constant age basis, therefore not taking into account the effects of depreciation.

“Wide-body jets have seen their market values decrease, on a fleet-weighted average, by around 30%, while narrow-body jets are down 25%,” said Thomas Kaplan, Valuations Consultant at Ascend by Cirium.

Value changes in the regional jet market were more limited, at just 12% decline on average – owing to the continued demand in large domestic markets which were among the first to recover.

Data shows peripheral aircraft types, such as the Airbus A380 and the A340, were more affected in terms of value declines, but the popular A320ceo and the A330-300 also suffered as the pandemic took its course.

This includes MAXs, NEOs, as well as Airbus A350s and Boeing 787s. In a low-demand scenario, it is natural that airlines would choose to fly the most efficient aircraft types available to them – keeping them in higher demand.

According to Kaplan, market lease rates have also seen significant declines. “Lease rates dropped by a fleet-weighted average of 25% for wide-bodies and nearly 30% for narrow-bodies. This is partly because the leasing inventory continued to increase throughout 2020, and so placing aircraft on new leases proved very challenging.”

Newer generation aircraft generally experienced milder value declines in terms of lease rates too, but these have been slightly more volatile. For example, the highly efficient Airbus A350 saw a 30% market lease rate decline, as a result of needing to be placed following various airline bankruptcies and restructurings.

According to the Ascend by Cirium view, values for some types – such as A320neos and 737 MAXs – have now reached the bottom. “If demand continues to improve, particularly in domestic markets, we do not expect to see any further declines on these aircraft types,” said Kaplan. “Meanwhile, some types have already seen value improvements, such as the Boeing 737-800 and the Embraer E190.”