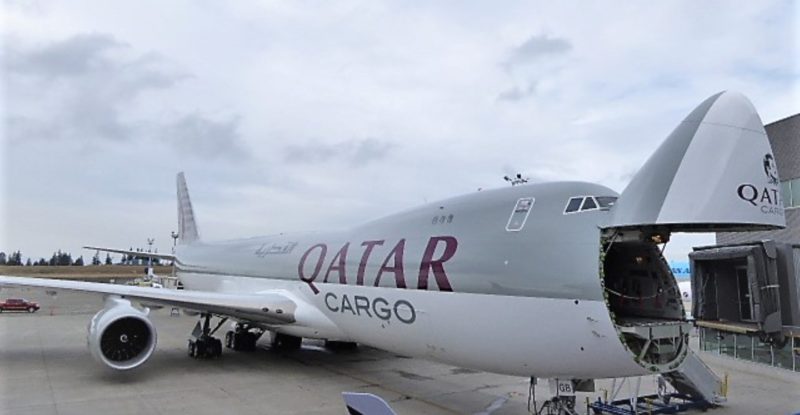 How is the Widebody Cargo Market performing?

The global volume of air cargo has been falling for 10 consecutive months, according to IATA data from August. This […]

The global volume of air cargo has been falling for 10 consecutive months, according to IATA data from August. This is the longest period of decline since the global financial crisis over a decade ago and reflects weakened global trade, not helped by the US-China tariff dispute, uncertainty and a weaker manufacturing sector. However, in general the widebody freighter sector has yet to reflect this pessimism. Orders have continued to come in, conversion activity is robust and some parked aircraft have been put back into service. Only at the end of this year is the market beginning to see some airlines start to consider reducing capacity for 2020.

In the past five years, there has certainly been volatility in the air cargo and freighter market. Air cargo traffic demand is very dynamic – growing steadily after the recovery in 2014, slowing down with a lower growth rate in 2015, going into a dip in 2016, bouncing back strongly in 2017 and slowing down again in 2018 and 2019. The market has factored in this volatility. Although there were some downturns in specific years of history, the level of growth had recovered within two to three years. Each cycle is about five to six years long.

The demand for widebody freighters is certainly impacted by widebody passenger flights providing additional belly capacity, which now accounts for around 50% of the air cargo market. The global fleet of widebody passenger aircraft will approach 5,000 by 2020. However, the growth in belly capacity is still insufficient to accommodate the growth of air cargo together with that of existing freighters. E-commerce is also one of the major driving factors with no signs of slowing down. Indeed this market size is forecast to double in next five years. Passenger aircraft also do not necessarily operate on the main air cargo routes. Air cargo capacity on main deck widebody freighters is therefore still in demand in the long term.

On the other hand, aged and inefficient freighters such as the 747-200/300F, McDonnell Douglas DC-10 and Airbus A300B4F/A310F have been continually retired since 2008 and account for less than 60 of the fleet today. Even the next generation MD-11 is starting to see increased retirement. New generation and passenger-to-freighter (P2F) widebody aircraft are coming to the market with better payload-range performance as well as fuel efficiency.

Traditionally, some freighter operators have preferred to convert passenger aircraft into freighters at a lower capital cost. Around a third of added widebody freighters in the past decade have been converted. The expectation is that 2019 will see slightly lower levels of conversions (circa 25 compared to 31 in 2018), focused mainly on the 767, with some A330s. These two types remain the focus in the next five years. As A330 values fall, it should become more attractive, especially as good 767 feedstock declines.

Looking at the global widebody freighter distribution by region, it is no surprise that North America has the largest portion of 56%, followed by Europe (18%) and Asia Pacific (16%). The composition of operators is quite different by region. The major widebody freighter operators in North America are the integrators and all-cargo carriers. FedEx and UPS operate 38% of widebody freighters between them, but it must be noted that some of the aircraft regularly operate in other regional hubs outside of the USA. The US-based cargo carriers such as Atlas Air and Kalitta Air also operate large fleets to support the intercontinental cargo business with 43 and 31 widebody freighters respectively, with Atlas heavily involved in the aircraft, crew, maintenance and insurance (ACMI) market.

Combination carriers (carriers operating both passenger and freighter aircraft) operate the majority of the widebody freighters in Asia Pacific. Korean Air, Cathay Pacific and China Airlines are the top three. Europe is a bit more dispersed, with cargo carriers, integrators and combination carriers all using widebodies, including Cargolux, DHL and Lufthansa.

The 747-400F dominated the large widebody freighter market for many years, but the successor 747-8F has not replicated its success. Only 88 aircraft are in-service and 18 on order. The more successful large widebody freighter is the 777-200LRF with 176 aircraft in service and 52 on order. The production rate is at around two per month. It has been popular because of its 102t payload and twin-engined economics compared to the 747F. It is the major large widebody freighter type of FedEx and DHL as well as other combination carriers such as Qatar and Turkish Airlines. A freighter version of the 777-8 is likely to succeed it. However, due to the delay of the 777-8 programme, the freighter version may well be delayed into the late 2020s.

The 767 has proved to be one of the success stories of the cargo market in recent years. Given its payload of around 100,000lb (45,372kg) and five to six hours coverage, the 767-300 freighter is an ideal aircraft for domestic and regional operations.

The air cargo market is dynamic and heavily affected by seasonality. Some carriers prefer to operate twice the frequency on a route with the smaller 767 in peak season rather than fly a larger 747-400F half empty throughout the low season. This helps the carriers to lower operating costs in the low season and maximise the yield with stronger bargaining power, by controlling the capacity in peak season. Of course, this only applies to those airports with no slot constraints like the US and EU secondary airports. In view of the current Asian major airport congestion situation, flying multiple times to the same airport in a day is a challenge.

The US integrators (FedEx and UPS) and e-commerce giant Amazon are the major operators of 767s. FedEx is the largest single operator which currently operates 79 factory-built 767-300ERFs with first delivery back in 2013. There are still 48 aircraft on order for fleet modernisation (including retirement of DC-10s) and expansion. The aircraft is also utilised in different hubs including those in Asia and Europe. The first 767F began operating in Europe for FedEx in July 2019.

Unlike FedEx, Amazon is building up its own fleet by setting up Prime Air through wet leasing from ACMI operators such as ATSG and Atlas. The ACMI operators are operating a 45-strong 767-200/300P2F fleet dedicated for Amazon, with five more being added. Although Amazon is not planning to move cargo other than its own products at the moment, Prime Air is continuing to expand both its 737F and 767F fleet to 70 by 2021.

Ascend by Cirium gives the same value to same-year factory-built 767-300ERFs and converted 767-300SFs because there are no significant differences in payload-range and operational characteristics. Since demand for 767s has grown in the last two years, the Market Values of newly delivered and 10-year-old 767-300ERFs are quite stable. With A330-200P2Fs entering into the market in Q3 2018, there is no significant impact to the values of 767s yet, given that the A330 has a higher cost per freight tonne kilometre (FTK). Besides, the major freighter operators, FedEx and UPS, prefer 767 freighters.

One very interesting new development in the widebody freighter market is the launch of the 777-300ERSF by IAI Bedek and GECAS. The lessor is launch customer for 15, with first conversion in 2022. With 10 more pallets than the 777-200LRF and a high volume, it should be attractive to the e-commerce and integrator market. The conversion will also provide an important secondary market option as increasing numbers of -300ERs are phased out in the mid/late 2020s.