As the Covid-19 (coronavirus) crisis develops, Cirium is monitoring in-storage aircraft figures on a daily basis: please bookmark this page to see regular updates on this topic.

Cirium has classified just over 1,000 additional passenger jets as having been placed into storage since yesterday’s (26th March) update, taking the worldwide total of in-active aircraft to above 8,500. Approximately 17,750 passenger jets remain in service as of today according to Cirium criteria, meaning they are considered to have flown at least once during the past seven days.

We also track storage locations, and Europe has the largest share with approximately 2,800 aircraft across 210 airports. Asia-Pacific has just over 2,000 aircraft at more than 150 locations, while the latest figures for North America are 1,600 and 130 respectively. The Middle East region is hosting nearly 700 stored aircraft at about 30 locations.

For example, 273 aircraft equipped with Pratt & Whitney PW4000 engines logged flights on Wednesday 25th March 2020, accumulating a total of 624 cycles and 1,881 hours. This represented a 48% decline in active aircraft compared with Wednesday 27th March 2019, while hours and cycles were down 66% and 56%, respectively.

In addition, our flight tracking showed several airlines failing to fly a single aircraft on 25th March. These included Air India, Indigo and SpiceJet in India, plus Easyjet in Europe.

Nearly 900 passenger widebodies, narrowbodies and regional jets have been added to the global stored inventory during the past day, according to Cirium’s criteria (at least seven days of continuous inactivity observed). Cirium’s experts expect to add large numbers of additional aircraft to the current total of more than 7,500 aircraft withdrawn from service, as the industry approaches the milestone of one third of the global fleet in storage (equivalent to approximately 8,800 passenger jet airliners).

Since yesterday’s (25th March) update, more than 600 Airbus and Boeing narrowbodies have been re-classified as in-storage, together with approximately 180 widebodies.

The above figures are net of the small number of aircraft recently returned to service in China. Cirium has transferred just under 100 passenger jets operated by Chinese airlines from ‘in-storage’ status to ‘in-service’ over the past seven days. Chinese carriers are close to reaching the milestone of 3,000 aircraft in operation.

Cirium’s daily hours and cycles utilisation tracking shows Chinese airlines flew slightly fewer than 1,750 of their Airbus and Boeing aircraft on Tuesday 24th March 2020, collectively logging over 4,200 flight cycles and 9,300 flight hours. Compared with Tuesday 26th March 2019, this still represents a 40% reduction in the number of aircraft observed flying, and a 60% decline in daily hours and cycles logged.

The rate of contraction of the global in-service passenger jet fleet continues to accelerate unabated, with Cirium reclassifying nearly 800 additional aircraft as stored over the past 24 hours. The grand total of in-active airliners is rapidly approaching 7,000 as the industry sails further into uncharted waters. 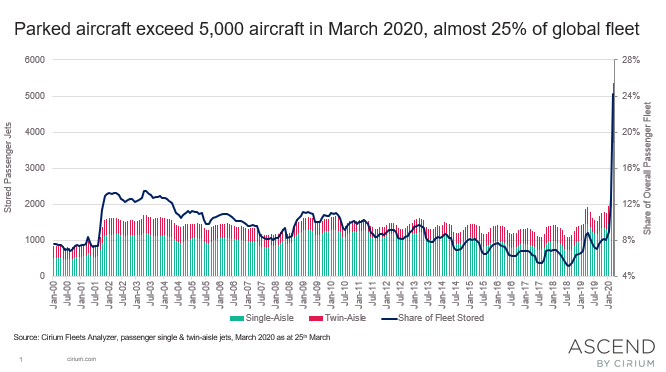 Since yesterday’s (24th March) update, Cirium’s research team has identified nearly 300 more Airbus narrowbodies that meet its criteria for having been withdrawn from active duty, while the corresponding figure for Boeing is a little over 200. Widebody fleets continue to be severely impacted, with another roughly 100 Boeing twin-aisles having been parked up, together with approximately 60 more A330s, A340s, A350s and A380s.

Cirium continues to log daily hours and cycles utilisation of the global fleet using its more than 600 sources of flight tracking information.

Looking at the A330 widebody twinjet fleet for Monday 23rd March 2020, just over 300 aircraft operated nearly 600 flights and approaching 3,000 flight hours. These figures have declined by approximately 50% compared with a week earlier (Monday 16th March). A comparison with Monday 25th March 2019 shows a decline of 70% in the number of active aircraft and a close to 80% reduction in daily hours and cycles.

Almost 6,000 passenger jet aircraft are now in storage at approximately 600 locations around the world according to Cirium’s latest fleet data update (24th March), representing nearly a quarter of the total fleet of over 26,000 airliners.

Cirium’s team of data experts is constantly monitoring the withdrawal of commercial aircraft from service by operators as the Covid-19 crisis deepens, and it expects storage figures to continue to grow significantly over the coming days in accordance with its strictly defined criteria.

Since yesterday’s update (23rd March), it has recorded net increases to the stored inventory of nearly 350 Airbus aircraft and more than 200 Boeing-built airliners.

Taking the Boeing 777 Family as an example, this data shows a net reduction in the tracked active fleet of 250, to below 700 aircraft in total,  comparing Sunday 22nd March with Sunday 15th March. The corresponding total number of hours and cycles flown by the global 777 fleet declined by close to one third, to below 1,200 flight cycles and a little over 8,000 flight hours between these two dates.

The global stored fleet of commercial passenger jet aircraft has grown by over 44% since Cirium’s previous update published on Friday 20th March.

Our data experts as of today have verified that more than 5,000 aircraft meet their strictly-defined criteria for ‘in storage’ status. Just under 300 additional Boeing 717s and 737s plus in excess of 300 747s, 767s, 777s and 787s have been withdrawn since Friday’s update. The split for Airbus types meanwhile is over 600 narrowbodies and approaching 250 widebodies added to the parked inventory over the past 72 hours.

This data shows the global A320 Family fleet – for example – has suffered a roughly 45% reduction in both tracked daily flight cycles and flight hours, comparing Thursday 9th January with Thursday 19th March. The number of aircraft tracked flying reduced by more than 2,000 between these two dates.

Please note, airlines are stating that they are parking numerous aircraft, however our diligent fleets research team are evidencing it at the primary level using flight status/tracking information to confirm what it is in fact in storage.

Our team of experts firmly believe that these storage numbers will continue to grow on a daily basis. Therefore please continue to view this page every day for the latest information.

If you require access to this data via a dedicated aircraft API then please contact us today.

Cirium’s latest fleet data update has recorded an additional 307 commercial passenger jet aircraft placed into storage in the full day since yesterday’s revision (19th March). There were therefore 3,561 aircraft in storage globally as of 20th March.

These figures include passenger widebodies, narrowbodies and regional jets where operational status has been verified by Cirium’s team of data experts and which have been delivered by the OEM to a customer.

If you require access to this data via a dedicated aircraft API then please contact us today.

Cirium’s latest fleet data update shows there were 3,254 commercial passenger jet aircraft in storage globally as of 19th March 2020, an increase of 769 compared with the 2,485 recorded for 31st December 2019, immediately prior to the onset of the Covid-19 crisis.

These figures include passenger widebodies, narrowbodies and regional jets where operational status has been verified by Cirium’s team of data experts and which have been delivered by the OEM to a customer. As a side note there are also more than 500 commercial passenger jets which have flown but not yet been delivered by OEMs. Although a number of these are in the normal production cycle, including almost 50 which have flown in the last 28 days, this total also includes some 420 737 Max aircraft which are additional to the stored numbers above.

A net total of just under 200 Airbus A320 Family aircraft have entered storage so far since the end of last year, and these have been joined by 134 additional A330s, with just over 250 of the European-built widebody twinjets now in storage altogether.

Since the beginning of 2020 the stored inventory of ultra-large A380s has increased from six to 27, and more groundings are pending following latest airline announcements.

Use fleets data to source the in-storage fleet

It is important to monitor the stored fleets of your clients and prospects. If you want to see the owners, operators and managers of aircraft in storage please contact us today.  If you are a customer of Cirium’s fleets solutions, then please speak to our customer service team who will gladly help you build reports to share with your colleagues.