It would be fair to assert that 2019 was not kind to commercial aviation. Not only did the the industry increasingly find itself in the crosshairs of policy makers due its environmental footprint, but intense competition and concerns over a slowing global economy saw a number of airlines ceasing operations altogether. With the exception of Jet Airways in India, nearly all of these failures have occurred in Europe, arguably the most competitive aviation market in the world. The first six months of 2019 saw Germania, WOW Air and flybmi disappear from the continent’s skies for good and while the busy summer months brought a brief respite, September gave us a further tranche of bankruptcies, including France’s Aigle Azur and XL Airways, Adria in Slovenia and perhaps most dramatically, Thomas Cook in the UK.

Following the successful conclusion of Operation Matterhorn (the Civil Aviation Authority’ or CAA’s programme for repatriating stranded Thomas Cook holidaymakers), much attention has turned towards the financial fallout from the latest tranche of airline bankruptcies, particularly on lessors. However, this episode has also shone a light on an area of financing which has grown exponentially in recent years and in many ways is now integral to the industry; the asset-backed security or ABS. Before looking at the ABS market in more detail, it is worth exploring the direct effect on lessors themselves.

At first glance, the relatively small size of the collective fleet of the aforementioned carriers (around 200 leased aircraft) has limited any negative direct effects on lessors. That is not to say that certain lessors will be able to completely avoid disruption, especially the impact of having to deal with aircraft on ground (AOG) when lessees default, as well as the risk of a reduction in lease rate each time the aircraft is redelivered. A typical example of such disruption can be demonstrated by examining the history of a Boeing 737-800 originally leased to airberlin in October 2009. Initially the aircraft was placed on a typical 12-year term; at that time, the Ascend by Cirium opinion of the CMLR for a 2009 build was $330,000 per month.

Eighteen months into the lease agreement, airberlin entered financial difficulty, forcing the lessor to repossess and then redeliver the aircraft to a Turkish operator, Izair, over 79 months, at which point the CMLR had fallen to $300,000 per month. When that lease ended, the aircraft was then placed on a long-term lease with Jet Airways when the CMLR was $260,000 per month, but 15 months later came Jet’s well-publicised demise. Finally, after a two-month AOG period earlier this year, the aircraft was then placed with GOL, with the generic CMLR now at $235,000 per month. 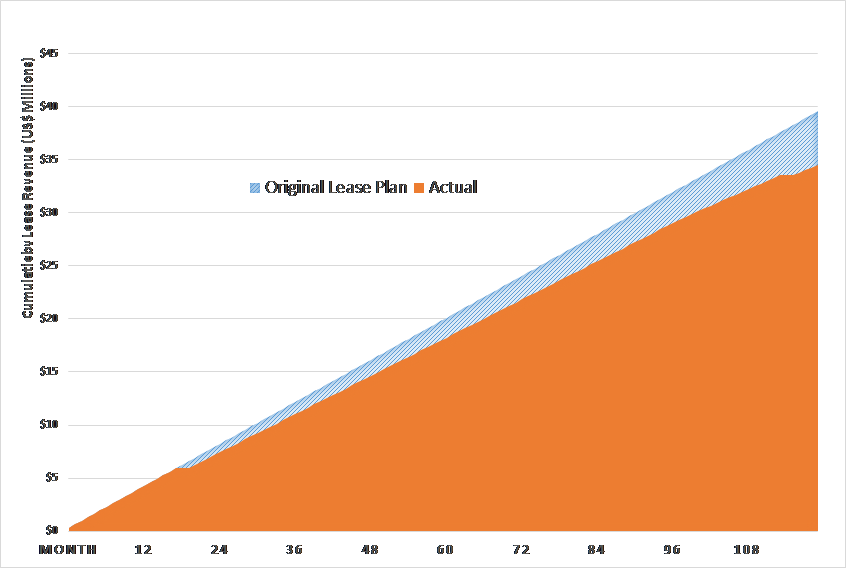 Had the original airberlin lease run its full 12-year term at an assumed $330,000 per month, the total rental return for the lessor would have amounted to an estimated $39.6 million. Conversely, based on the actual history of the aircraft, the total return would instead come to an estimated $34.5 million, as shown in the chart. Therefore, despite the lessor being able to redeliver the aircraft on relatively short order, the cumulative effect of having to accept lower lease rates for each new lessee, would result in a $5.1 million loss in cash rents over the 12 years. Even assuming a three-month deposit at the start of each new lease, this loss would still be approximately $2.7 million.

Of more interest was the fact that a number of aircraft operated by the failed carriers were financed through ABSs. Beginning with GPA’s ALPS 92-1 issuance in 1992, the securitisation of aircraft leases is almost as old as the industry itself and in many ways, has helped reduce overall risk by serving to increase the diversity of capital behind the financing of aircraft. However, for anyone who lived through the 2007-2008 global financial crisis, the words “Asset-Backed Security” will conjure up raw memories. This is due the fact that the failure of many real estate ABSs, in the form of Collateralised Debt Obligations (CDO) and Mortgage-Backed Securities (MBS), were instrumental in triggering the worst economic downturn since the great depression. Of course, while the small size of the aircraft ABS market means that it does not exactly pose a systemic risk to the global economy, the aforementioned spate of airline bankruptcies naturally leads to questions about the exposure of individual ABSs.

As with the lessors themselves, initial analysis suggests that no single ABS is significantly exposed. Using data from Cirium Fleets Analyzer, we can see that among the collective fleet of recent airline failures, a total of 11 aircraft were owned across eight different ABSs. On average, each ABS had 5.5% of its portfolio by value exposed to airlines which ceased operations. In terms of the percentage of lease payments affected, the figure was broadly similar at an estimated 5.3%.

How such losses will impact each ABS over the longer term may also depend on how quickly aircraft are redelivered and in this instance, investors can take solace from recent history. In the wake of the failures of airberlin, Monarch and VIM, ABS-owned aircraft took an average of 6.4 months to be redelivered. Assuming that each lessee paid a standard three-month deposit, the net result is only 3.4 months of lost cash payments, meaning that any loss of cashflow for these ABSs was temporary. Furthermore, ABS issuers will always ensure that risk is sufficiently spread to withstand airline failure events or other such economic shocks. It would be logical to conclude therefore that fears about the effect of airline failures on lessors and financiers would appear to be unfounded, at least for now.

However, demand for asset-backed securitisation in aviation is widely expected to boom over the next decade, especially in Asia, where investors are naturally attracted by the relatively reliable returns on offer. If the history of securitisation is anything to go by, one perennial risk will be that in order to meet demand from investors, issuers may be tempted to include more lower quality lessees in future ABS issuances. Therefore, as the market grows, the ABS market will need to be even more cognisant of the creditworthiness of underlying lessees as well as questioning of how various market changes could impact future aircraft values and lease rates. For example, what effect will the eventual recertification of the Boeing 737 Max have on single-aisle values and lease rates? Or, could a fall in the age at which aircraft are parted out increase risk within ABS portfolios containing older aircraft? Furthermore, investors and ABS issuers need to be aware that the value opinions which underpin ABSs can vary.

Airline failures such as that of Thomas Cook are nothing new, and the aircraft leasing industry has been quick to acknowledge that after almost a decade of favourable growth conditions, it will now have to navigate a potentially more challenging environment. Given past performance, this should likely prove to be no problem for more experienced lessors. How they affect newer entrants hitherto untested by such an environment, as well as the burgeoning ABS market, will only become clear over the longer term.

Advance the management of your investments, strategies, residual value risks and aviation assets by working with a global team of consultants and analysts with the most extensive aviation insight. Over five decades of expertise, with appraisers that are ISTAT and ASA certified and who provide insight based on the industry’s most comprehensive database. To find out more click here.