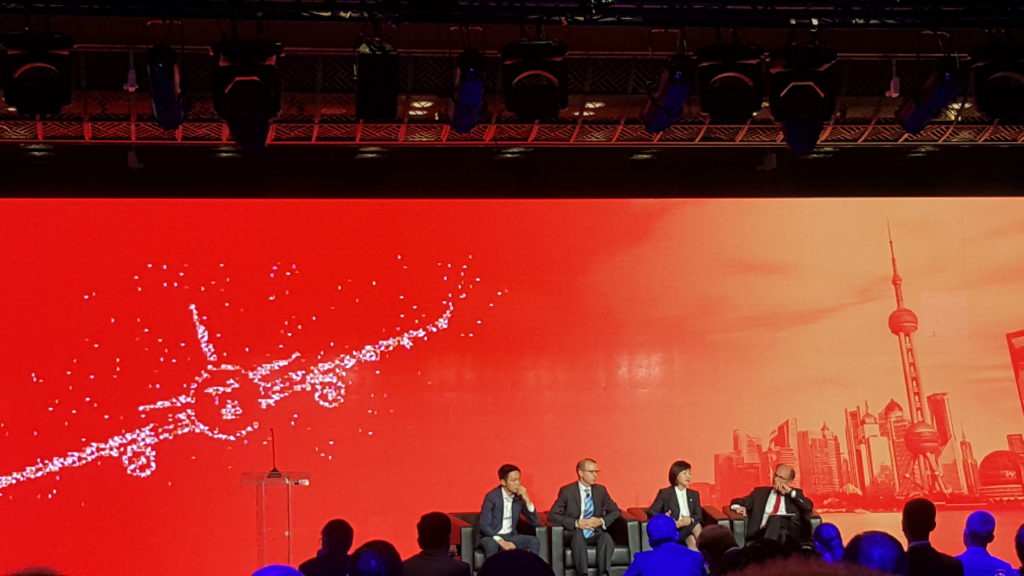 ISTAT Asia on the 8th May is turning out to be a success and here are our highlights from the conference so far.

The opening remarks from Yuerang Zhao, president of COMAC spoke about positive optimism for the Chinese OEM. Cirium’s Fleets Analyzer shows that the OEM had firm orders outstanding for 542 aircraft – 305 C919s and 237 ARJ21-700s – whilst it has already delivered 12 of the latter to two customers – Chengdu Airlines and Genghis Khan Airlines.

Kevin J Whiting, Deputy General Manager, Transportation, SMBC believes there is significant liquidity in Asia and the rest of the world. The panel of Laurent Delvart, Managing Director, Head of Asian Group, Credit Agricole and Anthony Boland, Head of Aircraft Finance, Transportation and Logistics  Westpac Institutional bank Aviation was in total agreement with Kevin’s comments and Christine  Chang, Managing Director, Head of Global, Structured Finance, Asia-Pacific of Citi group supports this theory, adding there was strong liquidity specifically in Asia and that there is an increase in banks investing in aviation assets.

In relation to interest rates, Christine Chang states that low interest rates should continue due to the performance of the US and EU markets. In addition, Anthony Boland comments that fixed interest rates began to rise in 2018, however in 2019 he expects these to remain stable and possibly drop, moreover Anthony believes borrowers should look at interest rates as a total cost. There was little disagreement on this topic although Laurent Delvart did add that oil prices are a variable and more concerning for the LCC market segment than interest rates.

In a poll during the ISTAT appraiser panel session including Ascend by Cirium’s Head of Valuations George Dimitroff, together with Angus Mackay, Phil Seymour and John Vitale, the audience gave their thoughts on the 737 MAX grounding with 55% stating they expect it to return to service by the end of 2019.

George said that one of the things that Ascend by Cirium is monitoring is the time it takes to recertify the aircraft by the large regulatory agencies and whether they do it simultaneously or not, which may impact the liquidity of the asset in the near term. For example the FAA may certify in September or October, but the other agencies may take longer if they want to do their own validation, therefore, this could lead to a phased re-entry into service. Another risk that was highlighted was the potential of weaker 737MAX operators to default on rental payments or go into bankruptcy while the aircraft is still grounded which could lead to distressed sales.

However, this problem is at the forefront of lessors minds, with MAX lease rates prior to the grounding already being below the 737 NG due to a concentration of deliveries to lessors, leading to pressure on placing these aircraft. George did speculate that the grounding  and consequent delayed deliveries may be assisting lessors on one hand, by  giving them more time to find new  customers to lease the aircraft to, but  on the other hand  it also reduces the appetite of airlines (especially smaller ones) to sign up to additional/new leases for the type.

In an interesting discussion between the two OEM heavyweights, Randy Tinseth – Boeing and Mark Pearman-Wright – Airbus on their aircraft programmes.  The discussion began by focusing on the opportunity the narrow body presents for the leasing market. Mark states that production rates for the A320neo are stable and the A321neo is performing well at an order book level, Cirium’s Fleets Analyzer states that there are 2144 A321neos on order. In response Randy spoke about the possibility of a new middle of the market aircraft, a concept that Ascend by Cirium’s Richard Evans has written a full report on. In contrast, Mark spoke about the successful order book of the A350, which Cirium’s Fleets Analyzer shows 623 aircraft on order. Furthermore, he anticipates that airlines will began replacing their 777-300ER assets with the Airbus A350 programme.

In a fascinating panel discussion between Jamie Carter, Cathay Pacific Airlines, Duong Thi Mai Hoa, Vice Chairwoman and Deputy Chief Executive Officer, Bamboo Airlines, and Chen Ke, Chief Financial Officer, Spring Airlines, the 1st question from the moderator Bertrand Grabowski, gave the panel the chance to comment on profitability within their airlines. Duong Thu Mai Hoa, states that Vietnam’s market is positive with an increase in GDP growth and an expectation that passenger numbers will continue to grow. In addition, she comments that unlike other regions in APAC, Vietnam is not as competitive for airlines due to a lack of operators in the country. In addition, Cathay Pacific’s Jamie Carter states that they are clearly not a LCC operator and are fully aware that they will lose out on market share to customers that prioritise price over additional features. Therefore, Cathay are focusing on ensuring they continue to listen to their customers and deliver products that meet their demands and provide a basis for a successful future. The final comment came from the CFO of Spring Airlines Chen Ke a LCC operator in China states that a lot of their competition for regional and international purposes comes from operators outside of China, although the majority of their income is from Chinese customers and they claim to understand their needs and requirements in order to offer value.

ISTAT Asia is proving to be an excellent conference full of debates and discussion and we hope you found this overview useful. Cirium is an award-winning aviation asset appraiser and provides regular insight on the market to help banks, lessors, insurance firms to manage their investments.