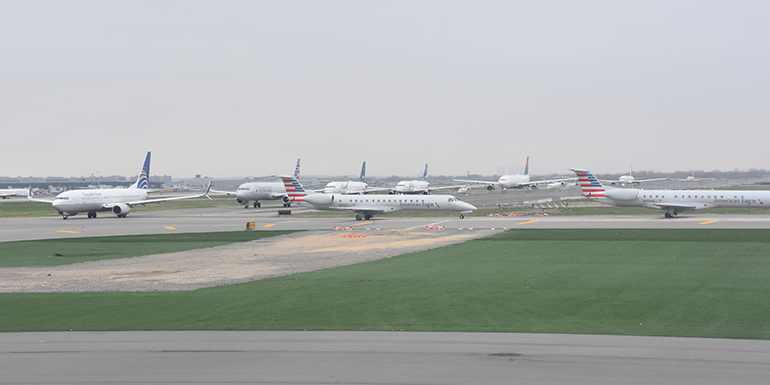 16-May-2017 – Pre-dates Cirium brand launch, Feb 2019. All references to FlightStats have been changed to Cirium.

As the airline industry becomes increasingly competitive, senior executives from some of the world’s leading airlines say their top business challenge is determining how they can differentiate more effectively.

In recent years, on-time performance has become a major selling point. Yet, delivering reliable, high-quality service to travelers is a major challenge because there are numerous factors that affect on-time performance, many of which are not within an airline’s control.

After announcing the winners of our 2016 On-Time Performance (OTP) Awards, we interviewed a few of the major airlines who claimed top spots, including Alaska Airlines, KLM Royal Dutch Airlines, Iberia and Iberia Express. In these discussions, we gained insight into how these airlines achieved outstanding operations.

Here are our top five tips for improving on-time performance:

1. Keep your employees in the loop

Every savvy business person knows that sharing your company vision with your employees helps keep them on track and invested in the results. It’s critical to your operational performance to actually take the time to align your performance goals with your entire organization.

If an employee is engaged with your company values, then they will clearly understand their priorities and have more confidence in their ability to make decisions, which is especially important for the operational teams. For example, all KLM staff–from ground staff and maintenance personnel to cabin and flight crew–have a commitment to their customers and their on-time performance.

“They all have worked very hard to achieve this operational performance,” said Bart de Vries, Head of Flight Operations at KLM. “We can only have the deepest respect and appreciation for all of them.”

Additionally, make sure you’re smart about the way you communicate your goals. The biggest mistake airline executives make is assuming it’s enough to present a strategic plan once a year at an all-company meeting.

The fact is that you need to be constantly communicating your plans and objectives for on-time performance in a way that all your departments will understand. Make sure you’re clear about what you want to achieve when it comes to your operations and how each team member fits in that plan.

2. Stay in sync with your partners

Not being able to control a codeshare or network partner doesn’t mean you should stop being diligent about evaluating their performance or thinking strategically about how you can become more synchronized. It’s essential to your reputation and overall operational numbers that your partnerships support your business objectives and complement your network. Successful airlines like KLM and Iberia review codeshare partners on a regular basis.

In fact, Iberia has been able to consistently improve its global on-time performance over the past four years due in large part to how the airline works together with its partner airlines, including Iberia Express. According to our data, Iberia was the fourth most punctual in the world in 2013, third in 2014, second in 2015 and the first in 2016. We’re sure that syncing their operations with Iberia Express, our third-year winner for Best Low-cost Airline On-time Performance, had something to do with it.

Although Iberia Express operates as an independent airline, it is also a part of the Iberia network. The two airlines actively work together to optimize their operations. For example, Iberia supports many long-hauls, transatlantic, and transcontinental flights, while Iberia Express services many of the smaller markets and brings travelers into the hub of Madrid. Once they’re in Madrid, travelers use Iberia flights for long-haul service. Working together in this way helps the two airlines maintain efficiency.

The increased use of new digital technologies–such as tablets, smartphones, enterprise social networks or cloud services–has already become commonplace in many business environments and airlines should be no different.

In today’s digital world, businesses have an opportunity to give employees the tools they need in order to do their jobs better. Creating a digital workplace will enable airlines to centralize corporate-approved tools so employees don’t go find their own workarounds, which could lead to inconsistency and inefficiencies. The right set of hand-held technology and software solutions can empower your team to communicate better and make decisions faster, which is critical to improving operations.

For example, KLM has invested in innovation and process improvements over the last few years. Many of their frontline staff carry iPads with e-tools that help them solve problems on the spot.

4. Take a critical look at your flight schedules

Airlines with exceptional on-time performance schedule block times–the total amount of time a flight takes from pushing back from the departure gate to arriving at the destination gate–more efficiently on their routes. Iberia Airlines implements a very careful process by their operation and commercial areas to design their flight schedule.

An airline that schedules a flight block time more conservatively pays more for flight crews and lower aircraft utilization in exchange for minimizing the impact of disruptions on other flights in the network and achieving better on-time performance.

On the other hand, an airline with poor on-time performance is probably scheduling shorter block times to lower their costs by operating additional flights, carrying more passengers with a single aircraft, and paying less in flight crew costs. This approach is actually less efficient, risks poorer on-time performance and increases the likelihood that delays will impact downline flights that were scheduled to use the same aircraft. In fact, it might be possible that you could spend more money in the long run if you don’t schedule your block times wisely.

“We did an analysis a few years ago and found if we had the block times of other airlines, we would have tens of millions less revenue and tens of millions additional cost,” said Ben Minicucci, President and Chief Operating Officer of Alaska Airlines and CEO of Virgin America Airlines. “So one of the things we’re proudest of is the way we design our airline.”

5. Turn your data into intelligence

Alaska Airlines uses data analytics to bring the obviously low hanging fruit to the forefront so they can make quick changes and gradually improve their operations.

To aid in this effort, Alaska holds weekly System Operational Performance Leadership (OPL) meetings. At these meetings, team members from divisions across the airline gather to analyze individual details that had an impact on on-time performance.

If you have exceptional on-time performance, then you can proudly announce that you’ve done a good job in spite of everything that has worked against you. With these tips, you can continue to improve your operations and maybe even win our OTP Awards next year.

Interested in learning more about improving on-time performance? Check out our custom operational intelligence workbooks  so you can manage operations in real time by incorporating new insights into your strategic planning process.