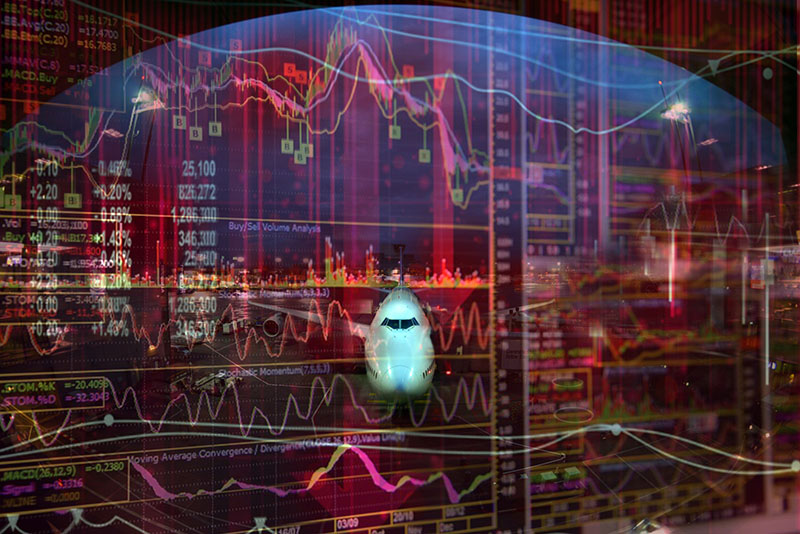 After an update on asset values and lease rates, the panel discussed the underlying trends and explored the market outlook for the coming months and beyond.

George Dimitroff, Head of Valuations at Ascend by Cirium welcomed Paul Sheridan, former CEO at AMCK Aviation, alongside Ascend’s Principal Aviation Analyst Syed Zaidi and Valuations Manager Sara Dhariwal for the Ascend by Cirium Q2 2022 Values Briefing. After an update on asset values and lease rates, the panel discussed the underlying trends and explored the market outlook for the coming months and beyond. Read on for our key takeaways from the live broadcast drawing on the latest Cirium data.

The single-aisle market is recovering at pace

George Dimitroff opened with an update on the current state of the market. Commercial aviation is continuing its recovery in line with Ascend projections; despite a short Omicron-induced stall in January 2022, global capacity is projected to reach 80% of 2019-levels by mid-year. Flight cancellations are dropping, utilization is rising, and the number of aircraft in storage is falling, reflecting a sustained recovery.

However, the recovery remains asymmetrical with short haul routes rebounding and long-haul routes lagging. Therefore single-aisle aircraft are in greater demand, with Market to Base Value ratios for those types improving significantly in the last twelve months compared to twin-aisles.

“The weighted average MV/BV ratio for narrowbody jets is creeping up into the high 0.9s, driven by the growing A320 neo and 737 MAX fleets where values are more or less already at Base Value level,” explained George, “As those fleets grow it pushes the average up, but we’ve also seen some recovery in A320 ceo and 737 NG values”.

The single-aisle market recovery is gratefully received among leasing companies, as Paul Sheridan explained. “This was beginning at the turn of the year, as the airlines with more room for manoeuvre started to plan for summer schedules and 2023. You can hear it in the sighs of relief in the lessor offices in Dublin and elsewhere; given the single-aisle fleet is the bedrock in most leasing companies, and the restructuring and re-leasing that’s happened in the last couple of years started to erode the return on equity, that can start up again and lessors are able to plan better and not spend money on transitions.”

Covid-related travel restrictions in Asia continue to slow the recovery of traffic in the region. With demand for two of the three major long-haul markets, Transpacific and Europe-Asia, tied to the region, which is a twin-aisle dominant market, it follows that twin-aisle aircraft values will continue to be the slowest to recover.

However, twin-aisle values have stabilised as long-haul flying activity returns in selected markets. The recovery of North Atlantic routes stands out, rapidly improving since February 2022 with very few flight cancellations to reach 84% of 2019 levels.

The fact that travel restrictions are almost fully removed on the North Atlantic really shows that when the barriers to travel are relaxed, long-haul travel will come back. We expect that as such moves follow, especially in Asia-Pacific, traffic will pick up in a similar way.

The lag in twin-aisle values recovering is not unprecedented, as Paul pointed out. “You have to expect widebodies to come out of a downturn worse than a narrowbody; they’ll take longer to recover, dip in value more and be harder to place. There’s a certain amount that is par for the course, but exacerbated by the level of travel restrictions.”

The panel agreed that widebody values have been permanently damaged by the pandemic, but the removal of restrictions in Asia is the key factor. “The recovery could be swift, if we start to see borders reopen – the need for travel is there, they just need to remove the barriers.” Syed pointed out. “The fact that the widebody market was a bit soft going into the pandemic exacerbated the impact, but there is a recovery.”

The freighter market is strong, but values may have peaked

Since the pandemic began, Cirium data shows that the number of narrowbody freighters flying has tripled and widebody cargo aircraft flights are up 60%. Utilisation remains high, having jumped by 15-25% early in the pandemic, with no sign of slowing as operators seek to capitalise on demand for air cargo.

This demand is also driving increased freighter deliveries and record levels of conversions, with 15-20 conversions per month and waiting lists standing at two years or longer. The panel discussed the outlook for freighter values, and concluded while the cargo market is still relatively strong compared to 2019, values in the sector may have peaked.

“People were paying a premium to have freighters right now, because if you have to take the feedstock and wait for two years for your conversion slot, you’re losing out on two years of revenue at extremely high cargo yields” explained George. “But as we convert more and deliver more factory freighters, that supply increases and gradually satisfies demand, bringing back balance.”

“There is a lot of supply there, and many lessors have entered the market, so there’s a lot of competition which is likely to put downward pressure on lease rates eventually.” Syed Zaidi added.

We are starting to get into that territory where there is an expectation of easing off on some values.

Three months on from the start of the conflict, and two months on from the deadline for lessors to retrieve aircraft from Russian carriers, we can now assess the impact of the abrupt cutting off of Russia from the international aviation marketplace. The return of a few leased aircraft at short notice and the halting of new deliveries into Russia introduced an unforeseen element of supply to the market, but the backlog formerly destined for Russia is being placed with other carriers quite quickly.

Before the conflict began, the firm order backlog to Russian carriers stood at 151 aircraft, including 39 aircraft scheduled to be leased from international lessors. With those contracts terminated and near-term deliveries unable to be fulfilled, the backlog has shrunk to 112, mainly due to OEMs still keeping aircraft scheduled to deliver in the more distant future in their orderbooks.

“What we do know is out of those aircraft that were nearer-term deliveries, certainly for the single-aisles, a very good number have been remarketed to new customers” George explained. “With high fuel prices, growing demand and supply chain issues, it makes having a neo or MAX position quite attractive in the near-term.”

For lessors, the impact of the conflict has been felt due to the impact supply and demand, but attitudes have also begun to shift.

We’ll have to see whether the conflict does start to affect how investors look at country risk, and whether we start to look at really differentiating between countries, and to see if it has an effect on values.

Paul explained. “It hasn’t been done for a while in the leasing world, but it hasn’t quite worked its way in there yet.”

To access the full presentation, including deeper analysis of individual aircraft types, the engine and regional aircraft markets, and the impact of inflation, watch the webinar on-demand.