Global passenger jet flight numbers declined overall in September compared with the prior month, reflecting typical seasonality in demand as the northern summer peak season drew to a close. However activity remained at approximately half the level recorded for 2019.

As of October 7 the global regions were experiencing decidedly mixed fortunes with seven-day rolling average flight numbers compared with the seventh day prior down 8.2% for European operators, where confirmed COVID-19 cases were again rising sharply in many countries.

US operators meanwhile have remained in positive territory since September 21 and recorded a 3.7% week-on-week increase for October 7, while China was at +2.3%. The rest of Asia Pacific posted an encouraging rise of nearly 6%. 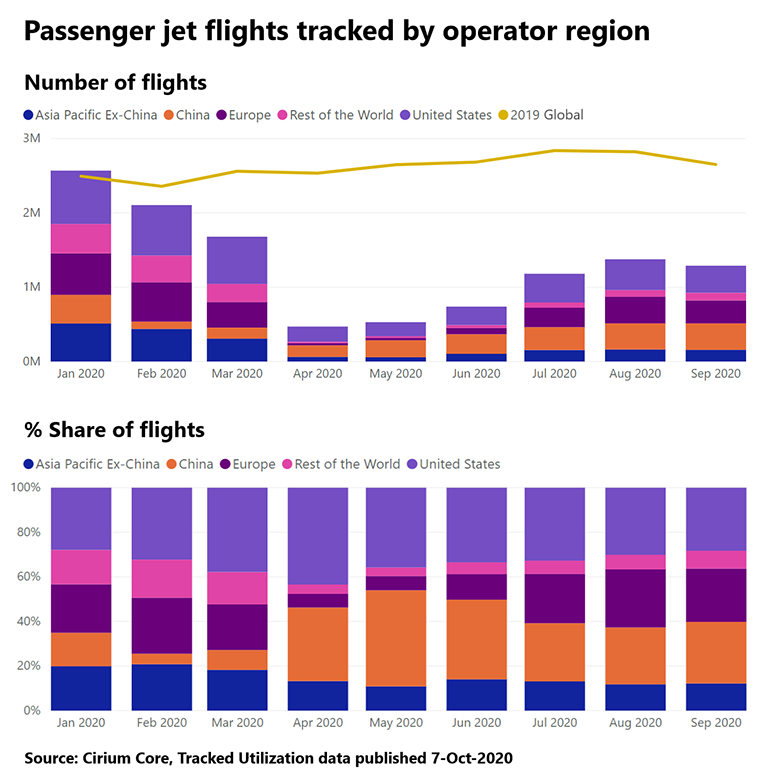 Compared with the equivalent day last year total flights flown by Chinese operators were only 1.6% down, but US operators were nearly 50% down and Europe, Asia Pacific excluding China and the rest of the world were down by more than 60%.

The prevalence of government-imposed cross-border travel restrictions and quarantine requirements has resulted in a huge disparity in the impact of the pandemic on international operations versus domestic. At October 7 daily tracked international flight numbers remained down by more than three quarters compared with the equivalent day last year, while domestic activity was down approximately 35%.

Cirium classified just over 8,200 passenger jets as having in-storage status at October 7, equivalent to approximately 31% of the global fleet.