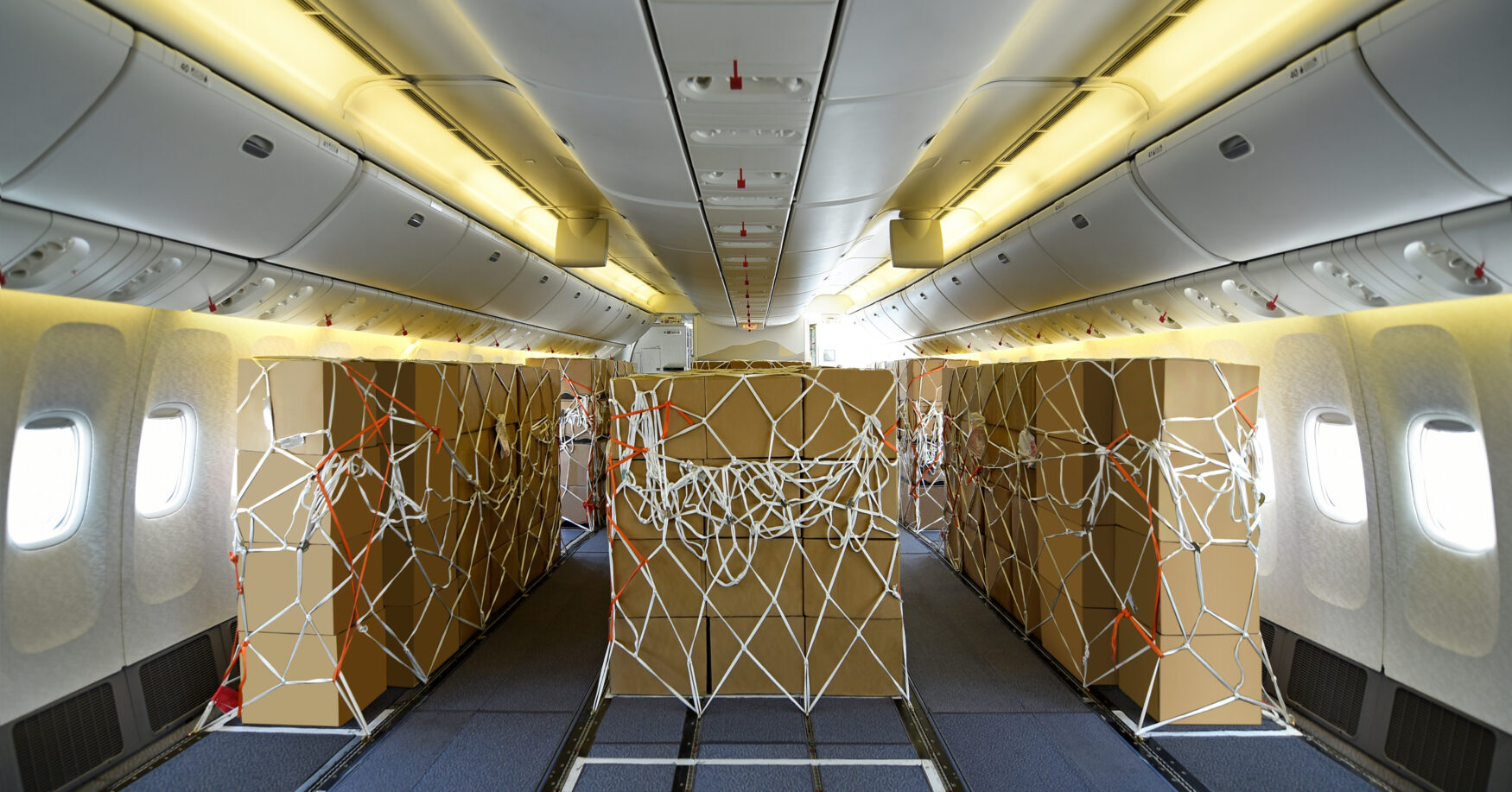 By James Mellon, senior aviation data research analyst for interiors and passenger experience at Cirium, with additional research from Nigel Fisher and Bin He.

Cirium experts continue to explore the topics from The Cirium Airline Insights Review 2020.

In late September, Airbus announced that it had issued a new service bulletin for the A350, permitting airlines to transport cargo in the cabin. Removing seats to make way for piles of boxes in the cabin of Airbus’ flagship airliner – widely lauded for the pleasant passenger experience it offers – is a very unusual concept. But of course, 2020 has been nothing if not very unusual.

As a result of the COVID-19 pandemic and the requirement to transport more freight by air, some airlines have been able to maximise the cargo-carrying capabilities of their aircraft. In this Data Insight, we look at the small global fleet of aircraft which have had their seats removed, creating space for cargo to be transported in the cabin.

Cirium’s Passenger Experience research team has identified 155 aircraft that have had most if not all of their passenger seats removed in order to transport cargo in the cabin. This Data Insight does not account for any aircraft or flights operated where cargo has been placed into the passenger seats for carriage, or for any aircraft operating cargo-only flights where cargo has only been loaded into the hold.

Increased demand for personal protective equipment (PPE) manufactured in Asia required fast distribution across the world. This, however, coincided with the sudden reduction in passenger flights, which sharply cut the amount of cargo capacity available.

Cirium aviation data researcher, Bin He notes: “At the beginning of the pandemic, Chinese airlines distributed essential cargo across the country on board passenger aircraft. Boxes of PPE were loaded into the hold, but were also placed into the passenger seats too. But as the pandemic intensified and global demand for PPE rapidly increased, it became apparent that airlines needed a more radical solution.”

Thirty-eight aircraft belonging to 10 Chinese airlines have had all or most of their seats removed, making up 25% of Cirium’s ‘Cabin Cargo’ fleet. Just over half of those aircraft are Airbus A330s, 14 of them operated by China Eastern Airlines. Bin He explains: “China Eastern began by operating flights where boxes were carried in the seats, but by March they were removing the seats entirely, further maximising the cargo capacity of each aircraft.” The A330 has been a popular widebody for these operations, accounting for 31% of Cirium’s Cabin Cargo fleet.

Ten of the A330s belong to Lufthansa, whose group chief executive Carsten Spohr is credited with coining the term ‘preighter’ (a portmanteau of passenger and freighter). Lufthansa Technik obtained approval from the German regulator to convert the cabins to carry cargo, removing seats and IFE wiring and installing fire-suppression measures. Each A330-300 could then transport medical supplies from Asia to Lufthansa’s Frankfurt hub. Cirium’s flight-tracking data shows that between late-March and late-May these aircraft operated an average of 50 flights each, after which time they concluded flying these services, and have since had their seats reinstalled allowing them to return to passenger service.

Widebodies make up the majority of our Cabin Cargo fleet: 80% of the aircraft are Airbus and Boeing twin-aisle jets. In addition to 49 A330s, 45 Boeing 777s have been employed by 16 different airlines, including the operator of the world’s largest 777 fleet.

Emirates has modified 10 777-300ERs to operate as ‘Mini Freighters’ supplementing its 11-strong fleet of 777 Freighters. Each of the 360-seat three-class aircraft have had 305 economy seats removed, creating space in the cabin for up to 132 cubic metres or 17 tonnes of cargo, in addition to the 40-50t capacity in the hold. Emirates senior vice-president of worldwide cargo operations Henrik Ambak notes: “We have operated flights on the modified Boeing 777-300ER aircraft with around 60-70 tonnes of cargo payload per flight.” The first of these aircraft commenced cargo services from Dubai in mid-June.

By this time, demand for urgent distribution of PPE by air had softened, as supply chains settled and shippers turned to less time-sensitive and more cost-effective modes of transport such as land and sea. With far fewer passenger flights operating, the lack of aircraft hold capacity restricted the ability to ship traditional consumer goods. Airlines such as Emirates have filled some of the capacity gap by introducing ‘Mini Freighters’. Ambak adds: “While supplies of PPE such as masks and gloves tend to be more frequently transported, we have also loaded items such as garments and textiles, fresh cut flowers, fruits and vegetables, pharmaceuticals and manufacturing components.”

The timeline shows that the peak number of Cabin Cargo aircraft in service simultaneously was reached in June with only minor fluctuations to the total since then. This has occurred because some airlines reinstalled seats on aircraft, which then returned to passenger services, while other carriers commenced Cabin Cargo operations during the second half of the year. So far, 60 aircraft, equating to 39% of the Cabin Cargo fleet, have completed their cargo duties, with the majority returning to passenger service. Some others have not: 20 aircraft, representing 13% of the Cabin Cargo fleet, have gone into storage. The rate of aircraft being converted has slowed, but has not stopped entirely. During the second quarter, 116 aircraft had seats removed; since then, just 32 aircraft during the third and fourth quarters combined.

In May, Air Astana announced the creation of a dedicated cargo division, Air Astana Cargo, with the intention of removing seats from all three of its 767-300ER aircraft to operate cargo-only services. The first example entered service in late-May and, the airline states, “has been reasonably busy operating cargo charter flights”. Despite the initial plans, Air Astana has not proceeded to convert a second aircraft, however. “We cannot yet be confident there will be sufficient demand to fully employ two semi-freighters, and there have been welcome indications of market demand to operate this aircraft carrying passengers again to some leisure destinations.”

While the number of converted aircraft is constant for now, what comes next for Cabin Cargo aircraft? Has this been a short-lived trend, or is there still a viable future for aircraft to be operated like this? Particularly if cargo capacity is required while passenger traffic is slow to return to pre-pandemic levels?

Chris Seymour, head of market analysis at Ascend by Cirium, offers this perspective: “Early in the pandemic, there was an urgent need to move cargo quickly. Now that things have settled down, airlines are looking at how to move cargo cost-effectively. Loading cargo into cabins requires a lot of manpower, compared with loading it into aircraft bellies in containers and on pallets. The issue for airlines is whether they spend money on reconfiguring cabins, or to simply operate aircraft with cargo loaded in the belly and on the seats if required.”

For the time being, Emirates says it will “continue to use the modified aircraft for cargo operations across our network. Given that global cargo demand continues to evolve rapidly, it is hard to make any predictions for the medium or the long term.”

In the short term the industry is faced with what IATA chief executive, Alexandre de Juniac describes as “the biggest airlift in history” as COVID-19 vaccines begin to be distributed across the world. The complexities of transporting vaccines, particularly those requiring cold storage, point to them being placed in aircraft holds, so it seems unlikely that they will be carried in the cabin. Nevertheless, until carriers are able to reintroduce routes and frequencies of passenger services, thereby increasing global air-freight capacity, the Cabin Cargo fleet will perhaps still play a role in global distribution, for the time being at least.