Steady month-to-month improvements in passenger jet flight activity suggest that sustained recoveries may be taking hold in some of the world’s key domestic markets including Mexico, India and Brazil. However progress appears to be stalling in others such as the USA, where COVID-19 cases continue to increase.

Brazil recorded a seven-day rolling average of fewer than 140 tracked scheduled services on June 14, representing a 90% decline compared with 2019. However by October 14 the year-on-year decline had narrowed to less than 49%, meaning that more than 1,100 flights were operated. 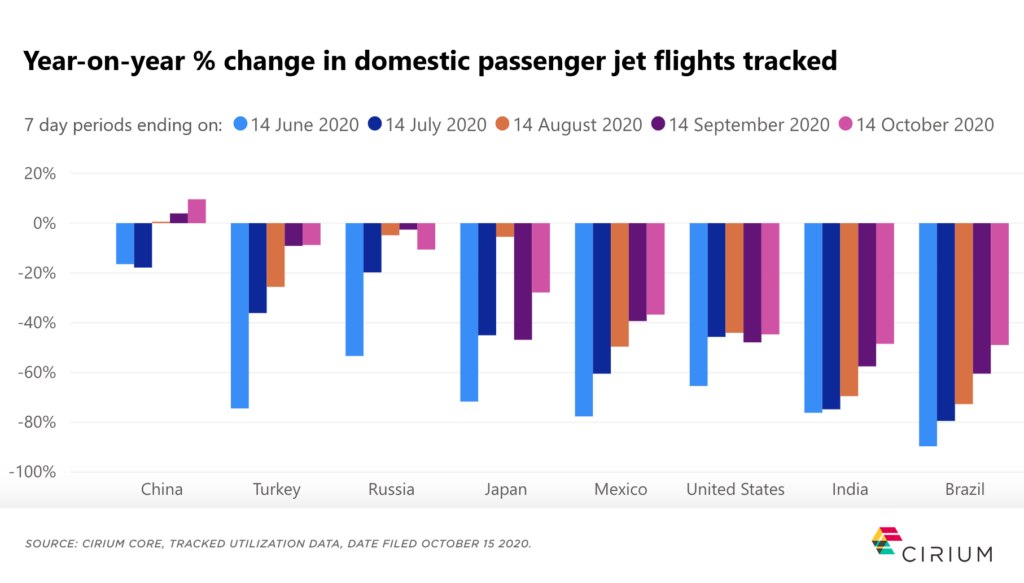 Although tracked flights in the US domestic market were down only two-thirds in mid-June, for subsequent months the deficit with last year has hovered between 44-48%, with tracked flights coming in at just below 10,600 on October 14 on a seven-day average basis.

Turkey and Russia meanwhile have made rapid progress towards recovery but remain in negative territory, leaving China as the only market to be enjoying year-on-year growth in domestic activity, with a weekly average of more than 11,700 flights at October 14 representing an annual increase of over 9.5%.

Cirium classified 31% of the commercial passenger jet fleet as having in-storage status at October 14, equating to nearly 8,200 aircraft. On this day just over 41,000 scheduled passenger jet flights were tracked, which is more than 53% below last year’s level, while flight hours were down nearly 58%.

The global seven-day average daily flights total exceeded 44,000 on August 9 but has since remained essentially flat and is yet to exceed 45,000, as increasing domestic flight numbers are offset by a continuing decline in international operations.